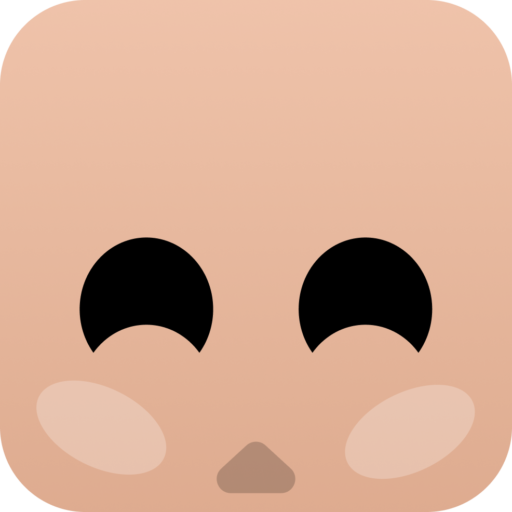 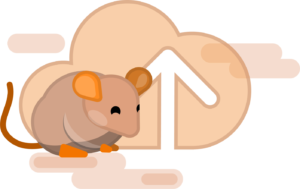 The template file consists of a header detailing what information can be imported into Tails, as well as examples of several animals. Note however that this is only a template. You do not need to provide all columns, nor have to follow the exact column sequence as presented.

Each row represents a unique animals.

Status: Refers to whether the animal is alive/active (write “alive”, or “a”) or dead/archived (write “dead”, or “d”).

Cage type: Whether the animal is held in a weaned cage (see more below).

Cage name: The name of the cage the animal is held in.

Cage barcode: The ID of the cage the animal is held in.

Room: The room of the cage the animal is held in.

Rack: The rack of the cage the animal is held in.

Coordinates: The coordinates of the cage the animal is held in (write “Letter Number” such as C7).

DOB: The animal’s date of birth.

Parent cage: The breeding cage the animal was born in.

Experiment: If applicable, the experiment ID that the animal is associated with (see more below).

Group: If part of an experiment, the group/cohort the animal is part of (see more below).

Generation: The animal’s generation (write NxFx such as N2F6, N for backcross, F for filial).

DOD: The date of death/archiving of the animal.

Euthanasia method: The method of euthanasia used to sacrifice the animal.

2. Fill in the Information

Which columns to fill

As mentioned prior, not all columns are required. If a column does not apply to you, just remove it or leave it blank.

However, you do need to provide the strain, date of birth, and cage identifier (either or both the cage name and cage barcode) columns. Once your file is imported, you will be asked to confirm whether all columns were successfully identified. If a column was provided, yet appears as ‘missing’, just help Tails identify it. 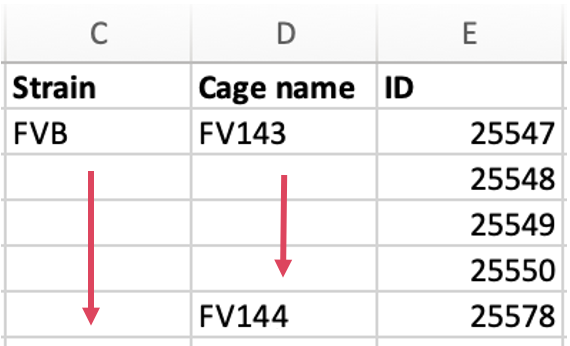 You do not need to fill every cell. If something does not apply to you, just leave it blank.

If left empty, the status will be assumed alive/active, the sex assumed male, the DOB assumed today, the cage type assumed weaned.

If leaving a strain or cage empty, the last information will be applied down. So make sure the first element of a set is properly identified!

If a date of death (DOD) or euthanasia method is provided, then the status column can be ignored as it can be deduced. Make sure those cells are therefore completely empty if your animal is alive.

This column is required.

If you’re unclear why a strain is necessary please check out our Getting Started tutorial.

Whether the cage is weaned or breeding. For a weaned cage write “weaned” or “w”, for a breeding cage write “breeding” or “b”.

Note that the exact cage type will be assumed to be Standard (or lastly used cage type for this strain).

Make sure that either one of these is present!

Failure to provide at least one cage identifier will result in animals being placed in incorrect cages.

Information will be applied down as explained above.

The genotype should be in a gene(allele/allele) format. There can be however many genes, accompanied by an optional allele.

Check out this page to learn more.

The generation includes both backcross (N) and filial (F) counts. If you do not keep track of backcross generations, just ignore it.

If you’re adding multiple types of ID, or want to specify the ID method, follow the provided template on the right. Six options can be placed in the header cell. If no method is provided, the ID will be assumed to be a tag.

If you’re using a punch/notch method, the Punch System will have to be selected during the upload.

To learn more about identification, visit this page first. 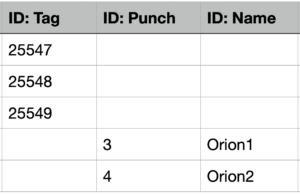 At this point, coat colors that are accepted are:

Once you are done editing your file, save it as Comma Separated Values (.csv).

Back on Tails, click on Choose file to start the upload. Don’t worry, you will still have a chance to confirm everything before the final import.

If errors were detected while parsing your file, you will be notified so the information can be corrected directly on Tails.

Just click on the ‘Fix’ button and fill in the requested information.

Why do I have an error?

If an information was incorrectly typed, or could not be parsed, Tails will ask for your help.

An error could be:

Before finalizing the import into your database, Tails will ask you to confirm whether the information looks right.

Click on each card to view more about the entities that are about to be created. Then tap on a row to reveal the details.

If all looks good, click That’s correct! to initiate the import.

With your data now imported, go make sure everything looks right. You can always cancel the most recent import.

If you added new strains, go on those strains’ detail pages and edit all lacking information, such as color tags, settings, stock number…

If you added new species, go in the app’s general settings to edit the cage costs associated with those species.